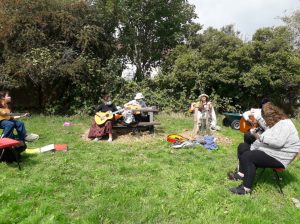 The first lockdown in the spring of 2020 heavily affected people who were already at risk of depression and suicide, and worsened the isolation already experienced by elderly people. The Covid crisis was also a new excuse for racist attacks, especially on Asians, accused of ‘bringing the virus’.

So it was a human emergency. We at CASE sought to set up an initiative to help people ‘healing’ from this amount of stress, depression and isolation. The idea was already there: a pilot guitar course which CASE Central hosted in the autumn and winter of 2019-20 had already shown the calming and uplifting effects of practicing music and its capacity to bind people from any nationalities or cultures – because all human beings share the language of music!

Our Open Air Guitar sessions started after the end of the lockdown, as soon as we secure the necessary funds. It was already the end of August 2020, but the initiative was blessed by an incredibly warm and solar autumn through September and October. We met at the Tavistock Community Garden in Hollingdean, within extremely strict Covid safety measures – the participants were limited to 12 and divided into two circles of six.

The initiative was seen as a godsend by our musical guests, especially disabled people and elderly people who had been in strict isolation for many months – it was, literally, an explosion of joy. And again we had students with various national and ethnic backgrounds.

Even if people had to keep safety distance, the comradeship was incredible. One of our students got a free guitar for an elderly South American student and drove it to her door; and the organisers researched and brought music from her country to play with her – she cried out of happiness. This lady had suffered a lot from isolation, and, in the past, had been a victim of xenophobic hate from neighbours, but she told us: ‘in the guitar group we have just become one’.

Another elderly participant said: ‘I love being here, this is why I come. Here I feel free. It gets me out of my house’.

Many thanks to Positive Action Officer Sasha Ahmad from Surrey and Sussex Policing Together for supporting our initiative because of its multicultural and potentially anti-racist dimension, and for recommending a grant from the Police Property Act Fund.

Also, many thanks to Community Development Worker Céza DaLuz, for discussing with us issues such as cultural exchanges and how playing music together could break down racist divisions among people.

And last but not least many thanks to our guitar teacher Damian Bolger of Easy Listening Music, for his impeccable work.

We have now awarded a small grant from the Healthy Neighbourhood Fund to continue to meet a few more time through the winter – this time in a large hall. The happiness, enthusiasm and joy of our participants have been catching and have been our reward.